Joined Sep 1, 2006
·
13,691 Posts
Some guy in California is trying to build the next great American supercar. It looks a little like a Viper but with a 700 hp Chevy engine. It sounds like another Delorean. Here is the article that appeared in Yahoo:

"In a small, pristine garage in North County San Diego, an unusual project is under way. Huddled around a single steel chassis, a team of expert automotive welders is fabricating a new high-tech supercar, dubbed the Lucra L148. It's the brainchild of Luke Richards, a quixotic entrepreneur and former pilot, who founded Lucra Cars in 2006. If all goes as planned, Richards and his team of 12 full-time craftsmen hope to create one of the most technologically advanced American supercars ever made.

Unlike most supercar projects, which can take years, if not decades, to complete, Richards plans to deliver the first L148 in the summer of 2014, just one year after the initial renderings. He expects the price to be comparable to that of a new Ferrari or Aston Martin, around $260,000. "A lot of guys try to build a $100,000 car that's as good as a $300,000 car, but then what you end up with is a failed, expensive, cheap car, all at once," said Richards. "It needs the correct budget to be built right."

That hefty budget will include a computer-designed carbon-fiber exterior, a lightweight, super-strong chassis made from chromoly steel – the same material used on Baja 1000 Pro Trucks – mated to a 700-hp GM LS V-8 engine, and several components Richards refer to as being "mil-spec," or military specification, including a wiring harness typically found on most military aircraft. And unlike Richards' first creation, the LC470, which was featured in "The Fast and Furious 6" and on a recent episode ofTop Gear U.S., the L148 will come equipped with air conditioning, satellite radio, and GPS navigation. Hallelujah.
But to understand what makes the L148 unique, and not just some cobbled-together custom car, it's important to understand how Lucra Cars came to be. 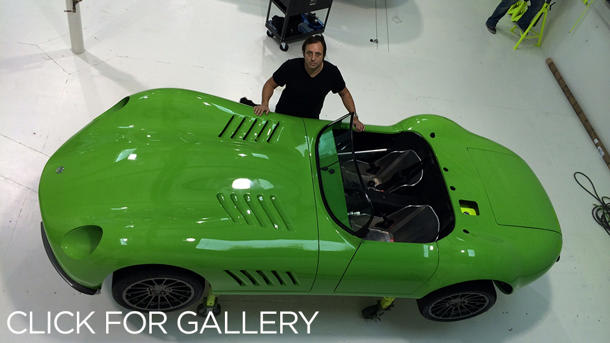 Richards, 42, was born in England, the son of an English father and an American mother. When his parents divorced and his mother returned to the United States, Richards became the product of an intercontinental breakup, spending half his time in Connecticut and the other half in London.

Along the way, he developed a simultaneous appreciation for American muscle cars and finely-tuned European sports cars."My dad always said you can have a car that goes fast in the straightaways or handles well in the turns, but you can't have both," he said. "And that was the attitude for a long time, that you couldn't merge them together at all.”

Following numerous stints in the car business, Richards moved to San Diego and launched Lucra Cars, promising to build a car that would marry American power with European precision handling. “I couldn't afford an automotive franchise at the time, so I created Lucra,” he said, noting that prior to starting the business, he had taken up residence on his small vintage boat docked in San Diego Harbor. "Besides, owning a dealership would not have done anything for my creative needs."

Interestingly, Richards says he credits his extensive automotive expertise to an early passion for 1:8 scale radio-controlled cars. "I learned all about aerodynamics and I had all this gear – slicks and extra tires, different bodies and wings, fully adjustable suspensions – it was like running a little Indy Car," he said, noting that he holds fond memories of racing RC cars with his father at London's now-defunct Crystal Palace circuit. "They were like little cruise missiles on the ground – sway bars, shocks, disc brakes, gears – everything a real car has, they have."

The early days of the company were challenging as Richards struggled to find footing in California's highly competitive custom car scene. But after the introduction of the LC470, a lightning fast, Lister-inspired roadster, he was able to catch the eye of legendary movie car designer Dennis McCarthy, who asked Richards to consult on numerous high profile projects, including several of "The Fast and Furious" movies.

"Profit is kind of an equal spread between selling our own cars, helping to design vehicles for Hollywood, and a bit of restoration work," said Richards, adding that he has sold 57 examples of the LC470, which range in price from $90,000 to $130,000, depending on engine options.

With interest in the LC470 at an all-time high and the introduction of the L148 just a few months away, Richards hopes to be selling between 100 and 200 cars per year within the next five years. "From there I would like to see the next stage of Lucra happen where we get a much larger level of funding and where we go forward and build a big production car — where we move up to the level of Lotus," he said. "Basically, everything should multiply by 10 every time you make a jump."

He's also aware that most niche-market automotive manufacturers often struggle in the face of heavy competition from larger brands. But he doesn't care. Richards explained that he is out to change the landscape, instead of conform to it. "If you're in a band, you can play cover songs all day long and play in the local bar down the street till the cows come home," he said. "If you want to make something of yourself, you have to go write your own music at some point. Otherwise, you are never going to be Van Halen."