Joined Apr 7, 2019
·
33 Posts
I am adding a front camera to use with my tazer. I have tested the camera, got it working and routed wire through the firewall. Just have to mount the camera. However does anyone know what these connectors are called?

They plug into the back of the wire harness. And I should use them to make the install more secure.


After I am done I can do a write up with pics if anyone us interested.

When they’re inside the wiring harness plugs, it’s called a pin-out isn’t it? That would make those pins I think...

However, you should go here to identify the connector in question and see if the images in the link above match what you are looking for...if that makes sense?

2016 SXT Plus Blacktop
Joined May 6, 2016
·
15,757 Posts
Something like female spade connector/terminal. Are they flat at the end or round? They are usually classified by wire gauge. Do you know which connector you are looking to attach them to? Generally connectors in a connector are latched...that is they lock into place and you have to push on a tang to release them.

Search our portfolio of Automotive, Truck, Bus, & Off-Road Terminals Models & Products and select your specifications. You can now buy select products directly on TE.com. We offer a wide array of products with applications across many industries. From standard solutions to custom designs, we...

Joined Dec 5, 2018
·
112 Posts
If I can guess...
It looks like you intend to add to an existing connector on both sides?
Probably NOT worth the trouble.
Pass the wires through the large bulkhead bellow without connectors, and add and connect them inside the cab.
You will probably never remove the larger connector, and it will only confuse the next user.
► Show Full Signature
'16 STX, 1 of 118!

Joined Apr 7, 2019
·
33 Posts
No I have all the other wiring routed. All I need is the final connection from the stripped wire into the back of the harness connector that plugs into the radio.

Zautomotive sells this but it is $25. Just thought someone might know what these connectors are as they probably cost 2 cents.

2018 Scat Pack SHAKER in Plum Crazy
Joined 9 mo ago
·
1,434 Posts
Salvage some from a junkyard car, and pull out the wires and solder your new ones in.
► Show Full Signature
Dynamic, Tech, Leather, Convenience, H.K Audio, S.P. Appearance, Sunroof, A8

2015 RT 5.7 M6
Joined Dec 26, 2016
·
6,798 Posts
The mopar connector repair kit link I posted earlier would probably be just as expensive if not more but it would have the correct wire termination. 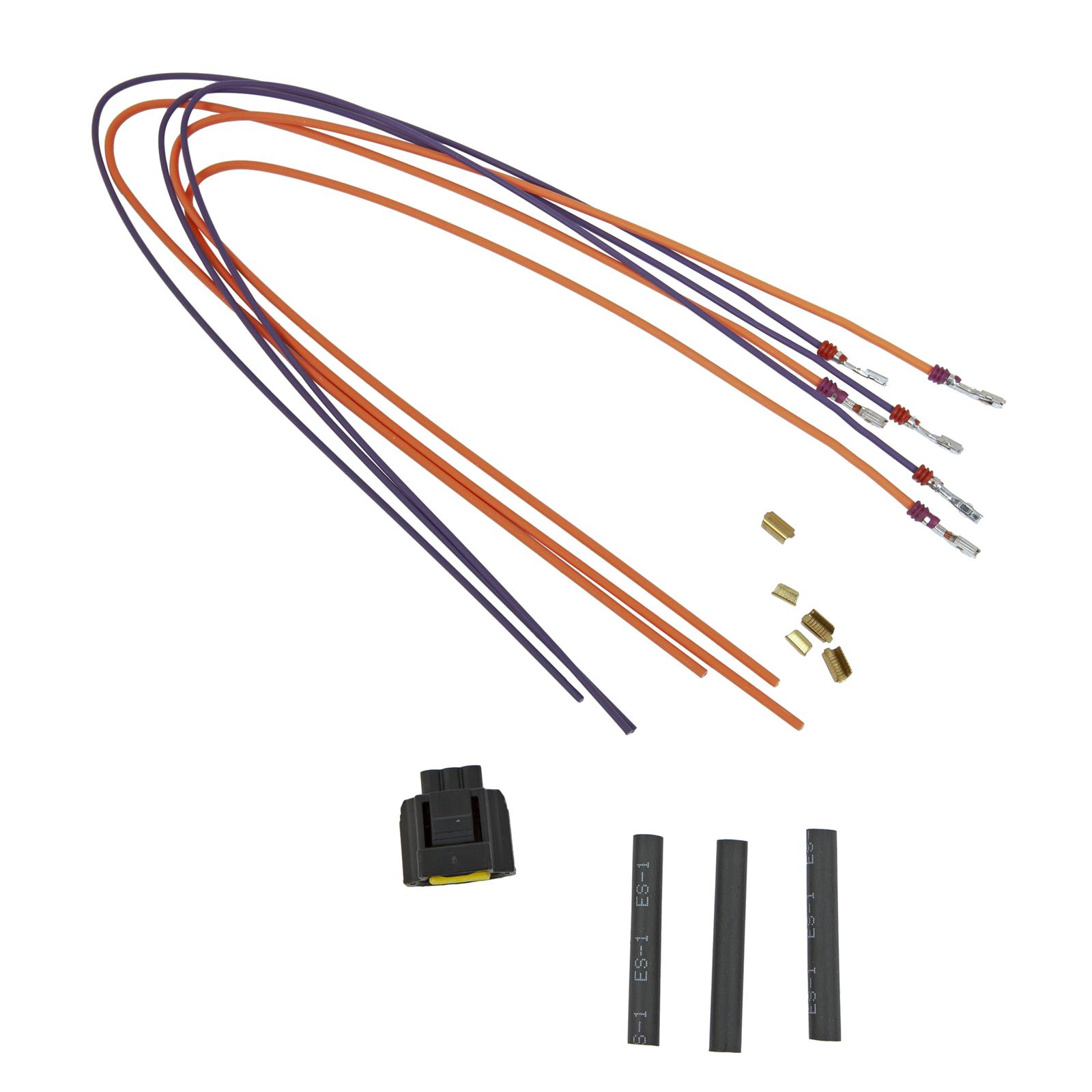 Joined Apr 7, 2019
·
33 Posts
Thanks for the advice folks. I had a look around in my garage and found an old wire harness that came out my Jeep when I swapped the factory stereo. The pin terminals looked a little shorter but they fit perfectly.

Still need to mount to camera and tap a power source from the fuse box.

Not 100% sure yet. I wanted to check the camera worked before mounting it.
I want it centered and with minimal drilling/cutting of the bodywork.

Will update when I am done.

2018 Scat Pack SHAKER in Plum Crazy
Joined 9 mo ago
·
1,434 Posts
If you don't have A8 and Tech with the radar unit, that would be the obvious choice with factory lower grill. (not my car, found it on the web...)

Joined Apr 7, 2019
·
33 Posts
Finally finished! Little bit annoying but something anyone can tackle.


So quick overview of my install.
1. Install camera on rear of stereo. I followed the Work Play Drive youtube video for this part.

For the connectors that go into the back of the wire harness you can probably salvage from any old radio. Zautomotive sells just this connector but it is pricey.

www.zautomotive.com
I found a wire harness from my 2010 Jeep stereo. I was able to pop the small connectors out using a sewing needle. They were shorter but still worked.

2. Run wires through firewall. So this was the most annoying part.
Start in the engine bay. Large rubber grommet behind the engine accessed from passenger side.

I used a long thin screw driver to poke a hole. It required quite a bit of force. Once through the first grommet there is a gap and another hole. You just have to wiggle around until you get through.

I then got some wire and a coat hanger. I used bright colored tape to fasten the wire and pushed it through the holes made by the screw driver.
Great tip here is to lubricate the end to make it easier to go through.

To access the other end you need to go under the passenger footwell. Remove the panel underneath the glove box. Disconnect the footwell light connector.


So for this next part I lay on my back looking up where the arrow points under the glove box. You should be able to see the wire you poked through. Again use bright colored tape. It is hard to access but an assistant with small hands will help.
Pull the wire down let it dangle in the footwell.
You can feed the wire down from the stereo into the footwell pretty easily. Then tape the wire and pull the wires back through the firewall. Again lubricate to make it easier.

3. Wire camera to power source. I tried fuse taps into the fuse box under the hood. For some reason my camera would not power on. I just wired it like this for now with an inline fuse.


4. Install camera. I wasn't sure what to do about this until I finally just went for it and drilled a hole in the lower grill surround. I was worried I might screw this up and I wasn't sure if I could even get the camera wire through here but it all worked out and I am happy with the look.
My camera came with a slim connector that I could feed through the hole and into the space behind the lower grill. I routed the other end of the wire down the gap between the radiator and the top of the bumper.

Last part was just tidying up the wires and lining up the camera. My camera came with a little alignment tool so you can fine tune once the camera is fixed in place.

Haven't tried it yet but here it is. https://www.zautomotive.com/zpu/firmware/tazer/ZES_245_031320r.zfw Instructions look all new too. https://zautomotive.com/zpu/instructions/tazer_user_guide_2.4.5.pdf All features of 2.4.4 Beta, plus: Force Engine, Transmission and Power modes independently...

Joined Apr 7, 2019
·
33 Posts
I have the original 2.4.5. I think I downloaded it the day it came out. I recall someone saying there had been a file put up then taken down again though.

I haven't noticed anything untoward so far on my 2019.

Joined Apr 7, 2019
·
33 Posts
One more thing. I also used zautomotive's Jeep JL front camera instructions for the stereo wire hook up. I used pins 24 and 25 as below.

Sparkster1875 said:
I have the original 2.4.5. I think I downloaded it the day it came out. I recall someone saying there had been a file put up then taken down again though.

I haven't noticed anything untoward so far on my 2019.
Click to expand...

Yeah, the very first 2.4.5 had a file name 031320r which just plain did not work, the following day they made 031420r available. Then a day or so later beta 1 was available and I noticed it would cause eco (I have a manual so this should not show) and sport to act up. The other day the made beta 2 available. Maybe it is my tazer (2 years old) but another member posted other issues (link is in my previous post).
1 - 17 of 17 Posts
Join the discussion
Continue with Facebook
Continue with Google
or sign up with email
Recommended Reading
Read More
Read More
About this Discussion
16 Replies
6 Participants
Last post:
ChallyTatum 5 d ago
Dodge Challenger Forum
Challenger Talk, the online forum for discussions, reviews of Dodge Challenger, and all things SRT, Hellcat, and Demon.
Full Forum Listing
Explore Our Forums
General Challenger Discussion Exterior Discussion / Modifications Performance Modifications New Member Introductions Dodge Challenger R/T Specific
Popular Communities