abugeater said:
After Almost two years as a daily driver in rain, snow and whatever, I think it still looks pretty good! Has 9,000 miles.
Click to expand...

It does look good, especially the red grill (where did you get it?).

Most people do not care for their cars like we do. But they generally are rust free, even in snowy places that dump salt on roads. Better paints help, as well as undercoatings. But the real advantages come from the use of plastic in parts formerly prone to corrosion. The entire nose is plastic. As is much of the rear skin. I believe the entire car could be made of plastic as it does not dent. If the right plastics are used, they are more durable than metal.

Cars built in the 70's were prone to rust on chrome plated bumpers (now gone). Lower portions of front and rear quarter panels were generally "Toast" after 7-8 years. But plastic parts replaced those areas on modern cars. I tapped the wheel wells on my Challenger. They felt like plastic. These were the worst areas for corrosion in years past.

In 40 years, there will be 2014 Challengers that are mostly rust free. They will probably have replacement floor pans that are made of rust free materials available. Yep these Challengers are better in almost every way than their predecessors.

BTW what color is that? Deep Water, Blue streak, or Jazz? 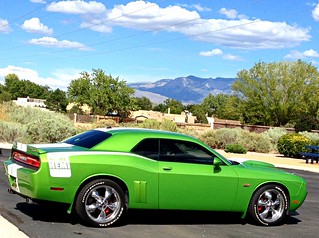