Great looking cars to me. They're into the "spirit" of the original Vette, offering an American sports car to go against overseas offerings.

Times change, but IMO, this Vette hit the mark with its styling. If the engineering is sound, it'll be a BIG winner.

the back end styling resolves better than the C7.

When the all but inevitable super charged version shows up. The argument to buy just about anything Italian for reasons other than the ability to say, "I can afford it/you can't" will be gone entirely.

2018 Scat Pack SHAKER in Plum Crazy
Joined 9 mo ago
·
1,428 Posts
I love them, everything from C5 on, just keep getting better, which means used ones keep getting cheaper. I really like the white as well. I can see myself wanting one in the future.
► Show Full Signature
Dynamic, Tech, Leather, Convenience, H.K Audio, S.P. Appearance, Sunroof, A8

Joined Jun 30, 2008
·
684 Posts
I know we already hashed it all out on the Corvette. I still don't get why GM said they reached the "limit" with front engine-rear drive configuration. True, maybe. But that's not the mission of the Corvette.

Honestly, will anyone from young and old choose this Corvette over a Lamborghini Aventador? Forget the numbers, which car will sell more posters? If Corvette was 0.05634 seconds faster, which car will kids dream of? Yes, one day GM will pour all the SUV $$$ to make Corvette the best and the fastest. So what? It's 0.098723 faster than a 911.

As for the front engine layout, Ferrari has not given up. Neither has Benz. At the end of the day, it's about selling cars, And these front engine - rear drive cars are sexy AF. So was the Corvette.
► Show Full Signature
My friends call me "O.J." - Oriental James.

Pioneer4x4 said:
I love them, everything from C5 on, just keep getting better, which means used ones keep getting cheaper.
Click to expand...

Joined Oct 3, 2016
·
1,171 Posts
Interesting how the dynamics/handling on the Vette have drastically changed with this C8. Previous generations have had the reputation of being a bit tail happy. This one looks nicely planted now. I can’t think of another car that has larger brakes on the rear than front.

MiHiHemi said:
Once they flood the market and start showing up on used car lots, I could be tempted to add one to the stable.
Click to expand...

I thought the same thing MiHIHemi!

My thoughts are to wait until the second year used ones because in my opinion, the bugs won't be worked out especially on a Brand New design such as the C8. I think of when the C7 Z066 came out and they had all kinds of cooling issues with the LT5 motor. The same thing with the cylinder heads on the C6 Z06 too. I'd let them get the bugs worked out first instead of having to use the warranty to fix issues.


TA 392 YJ said:
True contender for the title of "Best car in the world", all things considered.

When the all but inevitable super charged version shows up. The argument to buy just about anything Italian for reasons other than the ability to say, "I can afford it/you can't" will be gone entirely.
Click to expand...

Actually, they're talking about the C8 Z06 having a flat planed crank twin turbo motor in her, kind of based off of the Cadillac Blackwing motor, but with a flat plane crank. The C8.R race car has an FPC (Flat Plane Crankshaft like the Ford GT350) in it and it sings like a bird (and flies like one too ). She's going to be a Absolute BEAST!

Joined Dec 23, 2018
·
54 Posts
I feel that my Challenger is more of a road/trip car. You can keep a cooler at arms reach, buy anything and you can just put it behind the seat or anything else for the matter. This new C8 seems to be for sporting around, not too practical. Buy a box of doughnuts and where would you put it?? ..in the trunk/frunk?? Maybe just take it to the golf course(I don't golf !). I will stay with my Challenger and have that feel of a real car with plenty of room. I do own Corvettes, but Challengers are the tops.

19johned53 said:
It'll never happen for me, but one of those in a good red, would keep me grinning.

Great looking cars to me. They're into the "spirit" of the original Vette, offering an American sports car to go against overseas offerings.

Times change, but IMO, this Vette hit the mark with its styling. If the engineering is sound, it'll be a BIG winner.

"Retro" for a Vette just isn't the game.
Click to expand...

Not gonna happen for me either.
The cars styling is growing on me, but I am not head over heels in love with it.

I don't like the gauge layout. Call me old fashion, but I still prefer round gauges that have needles that move.

As far as "Retro" not the game for the Vette... your right, its not.
BUT, it very well could have been.

Chevrolet could have done a hard core, true to form, retro 1964 Grand Sport.
It would have had to been done with the same commitment that Ford had, when it brought out the 2005 Ford GT (The modern GT40)

A modern '64 Grand Sport Corvette would have been a huge hit, but it would have had to been in production by 2006/2007, when the "Retro theme" was still fresh and growing in popularity.

IMHO, Chevrolet also dropped the ball with the Camaro, by not following the Ford Mustang and Dodge Challengers more authentic styling Q's.
The 2010 Camaro's styling should have been MUCH closer to the '69 model that inspired it.
Not some quasi-cartoon, futuristic version.
► Show Full Signature
2013 BOSS 302 Mustang, School Bus Yellow, 6spd, Recaros, Torsen diff w/3:73's, Summer Pirelli's, Side exhaust Uncorked!...Current Ride.

Joined Nov 17, 2018
·
146 Posts
Looks like a Lambo to me. Trying too hard to make it look like a supercar than the old school Vette.
► Show Full Signature
Screw Your Discount
I'm Sorry your wife made you buy a mini van.
R

Sent from my iPhone using Tapatalk
Click to expand...

This is one company that does conversions. 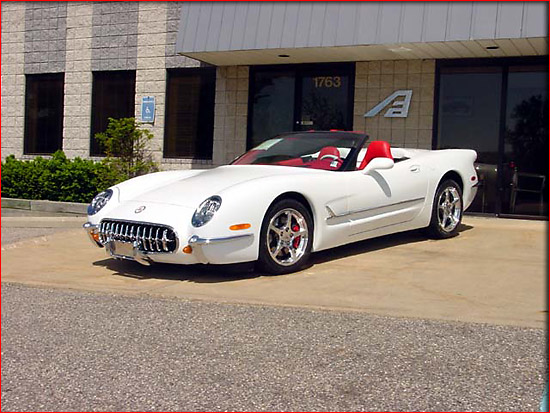 Joined Apr 1, 2019
·
45 Posts
I am waiting for the C8 convertible. It's the first time I actually prefer the styling of the convertible over the standard hard top (I hated the look of the C7 with the soft top up). It very well may be the car that replaces my T/A 392 in a "few" years, since I really miss open air driving.

SpeedShift said:
IMHO, Chevrolet also dropped the ball with the Camaro, by not following the Ford Mustang and Dodge Challengers more authentic styling Q's.
The 2010 Camaro's styling should have been MUCH closer to the '69 model that inspired it.
Click to expand...

I don't disagree with what you said, but I do see the body lines of the 1st gen Camaro in the current car (for the past two gens). I think GM failed to hit the home run with the execution of front and rear lights. The face and the rear end. There's opportunity to link that heritage, and GM didn't do that.

Take the tail lights. That's unexecptable, like they ran out of time. Couldn't someone just work on the weekends to finish the design?