My GT in the snow

Joined Jul 2, 2017
·
45 Posts
This is my GT. As you can see, unfortunately, I do not have a garage space for it so it got buried under a snowpile. But I am attesting to the fact that the GT works quite well in the snow. It works just as well as other 4 wheel drive SUVs I've had. You still have to be careful and not be reckless in snow and ice, but I've been pleased with its performance. The car is quick to grip and correct itself when feeling a skid. The only gripe I have is that on extremely cold days, the up/down window feature (on all Challengers, not just the GT) can be a nuisance. I was late to work twice because my window was stuck causing my door to be stuck open. I was able to pry the door open to get into the car, but it took me 15 minutes of running heat full blast for the frost on the window to melt enough so that I could lower it in order to shut the door without bashing the rubber seal which prevented it from closing when the window was frozen in the up position. I've been waking up earlier because the excuse of "I'm late to work because my window was stuck up and my door was stuck open" sounds ridiculous.

Joined May 14, 2014
·
269 Posts
That is a great pic! Here's one of my Scat Pack Shaker after a recent light snowfall. I'm one of those idiots driving V8 muscle year round because I freakin' love it!

Joined Jul 10, 2016
·
291 Posts
I had mine out today in the snow (scatpack). I had no choice today. My other car is down, and my wife had appointments today and used her 4x4. So I was left with my snowscat. Yeah those all seasons are not really for all seasons...lol. but it was doable. Just very slow starts and no sudden lane changes. But it was doable. This was the first time I had to drive a sports/muscle car in the snow. Hopefully I can get my DD fixed, and can park the scat again until its warmer.

ckaram said:
That is a great pic! Here's one of my Scat Pack Shaker after a recent light snowfall. I'm one of those idiots driving V8 muscle year round because I freakin' love it!

Right on! Love the looks from the Jeeps/SUVs/Trucks, and the Subaru drivers as I drive a 485 hp RWD car in the snow.

Sent from my SM-G950U using Tapatalk

I always remote start to warm up/defrost my car so haven't seen the stuck window issue yet. I also have Rain-X on my windows so that may help as well. 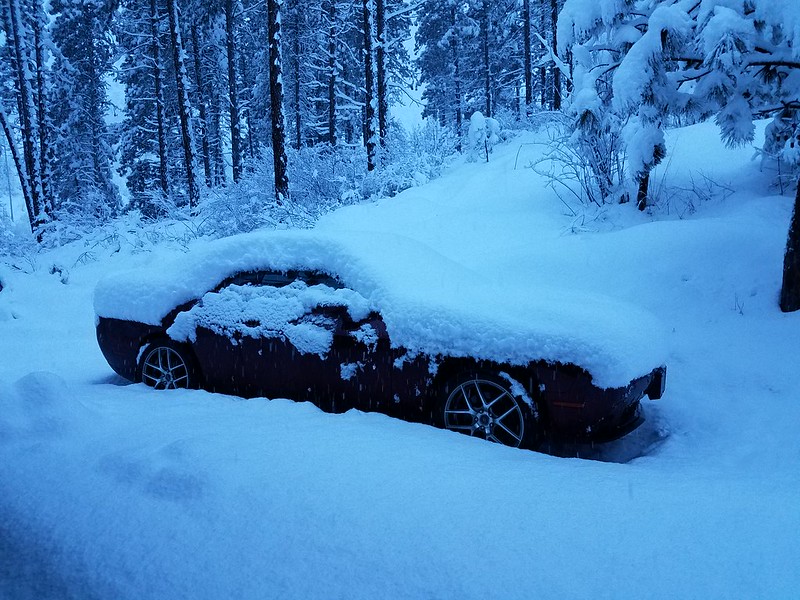 Joined Aug 15, 2011
·
172 Posts
All of us in cold climates can relate to the window issues. There are three things I can recommend from my experience.
1. Always have a spare credit card (or any card with similar size and thickness) to use as a scraper to break the ice seal between the glass and the weatherstrip
2. Have a can of deicer spray handy
3. If you are experiencing stuck windows many days in a row try an ice preventative spray (like Prestone Ice and Frost Shield) before you leave you car for the night
► Show Full Signature
2015 Dodge Challenger Scat Pack Sublime, 6 speed
2015 Dodge Ram 2500 4x4 Black w/Black App. Package
1969 Dodge Travco Mahal 2+2 Motorhome

ckaram said:
That is a great pic! Here's one of my Scat Pack Shaker after a recent light snowfall. I'm one of those idiots driving V8 muscle year round because I freakin' love it!