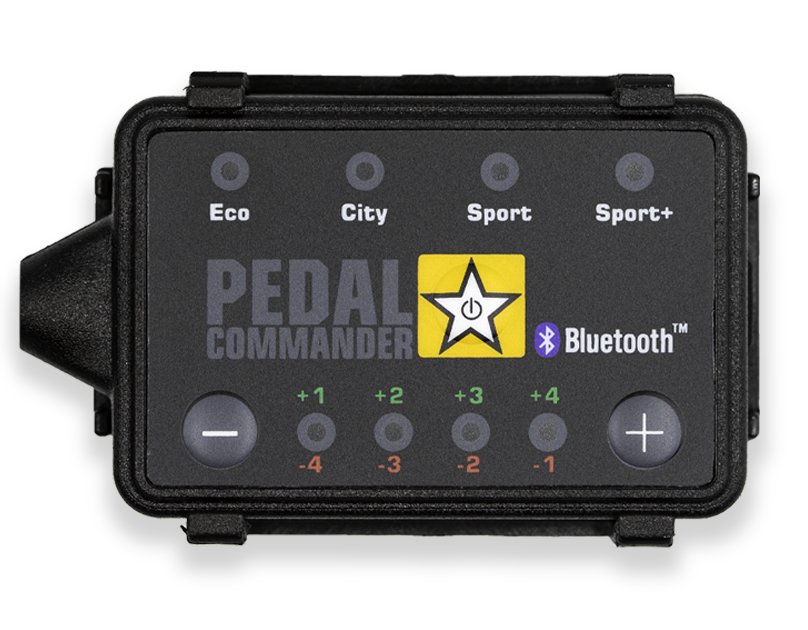 Feel the power of your Challenger faster by adding the Pedal Commander Throttle Response Controller for 2009-2019 Challenger Eliminates Delay. Nowadays, vehicles are notorious for their delayed throttle response. That's where the Pedal Commander comes in. These days, vehicles use a drive-by-wire system that monitors the position of the gas pedal to control the throttle electronically, similar to a dimmer switch. The problem with this setup is that the signal from the pedal has to first be sent the ECU, which in turn then sends the signal to the actuator motor that controls the throttle body itself. This delay is most noticeable when trying to speed up to merge with fast moving traffic or pass a slower moving car. However, the Pedal Commander Bluetooth Throttle Response Controller will eliminate that delayed throttled response, giving your vehicle a drastic night and day difference in performance. Four Adjustable Control Modes. Unlike other throttle control devices that are either on or off, the Pedal Commander comes with 4 control modes: Eco, City, Sport and Sport +. Best of all, each mode has an additional 8 different levels of sensitivity which allows you to personally adjust each mode to your own personal driving style and needs. Switching between modes can be done manually on the Commander or can also be done using your smartphone (Pedal Commander App), without having to bend over and physically touch the Pedal Commander. Compatible with Aftermarket Programmers. The Pedal Commander can be used in conjunction with common aftermarket OBD-II programmers and/or monitors such as: SCT, Diablosport, Hypertech, Superchips, Bully Dog, and Edge. 2-Year Product Warranty. Pedal Commander manufactures their Bluetooth Throttle Response Controller to the highest quality and standards with CE and TUV Certification. However in the event you do receive a defective or malfunctioning device, Pedal Commander will replace it free of charge within 2 years of the original purchase date. Easy Plug & Play Installation. The Pedal Commander Throttle Response Controller connects directly into the stock throttle position sensor found on the drive-by-wire gas pedal using an OEM style plug and play connector with no permanent modifications required. The Pedal Commander is 100% reversible making it warranty friendly.

Application
•••••
FREE SHIPPING in the Lower 48 states! Half price shipping to Canada.

2015 Challenger Scat Pack
Joined 9 mo ago
·
4 Posts
Are you able to have a Tazer with the pedal commander? Using both at the same time
J

Baby Cat driver said:
Are you able to have a Tazer with the pedal commander? Using both at the same time
Click to expand...

It's funny you ask - I just installed a Tazer on my 2018 today, which also has a Pedal Commander. So YES, you can have both. The Tazer connects to the OBD-II port (you have to add a separate ODB-II port via a Tazer Double Bypass if you have a 2018 or newer Challenger), while the Pedal Commander connects in-line with the gas pedal.
B

2015 Challenger Scat Pack
Joined 9 mo ago
·
4 Posts
Great. Thanks for that. The pedal commander is awesome. I had someone riding with me when i had it on Sport+ 4+, and they spilled their soda lol. Classic. But I'll get a tazer now then.
J

Joined Jan 25, 2019
·
1,818 Posts
Yeah, you can do some pretty cool stuff with the Tazer. Using the Tazer menus is a little confusing at first, but you quickly get used to it. My car doesn't have the adaptive cruise feautre, so that "bank" of three buttons on the right side of the steering wheel don't do anything (it's basically just a plastic cover that looks like three buttons, but the buttons aren't functional). So I also ordered the actual buttons to replace that "Fake button cover". If you do this, then the Tazer will allow you to "map" certain Tazer functions to those buttons as a quick way of activating certain features. I'm going to use it for forced-RWD/forced-AWD, maybe line-lock and there was one other feature that i was going to map to the last button, but can't remember what it was off the top of my head.

The actual buttons are crazy-expensive for what they are ($45 for three tiny plastic buttons), but it's a one-time cost, so it's worth it to me.

Here is a link if interested:
Aux Buttons – Z Automotive

Make sure you select the right button style if you do buy them (my 2018 used the "B" style). They were super east to install.

Also, if you have a 2018+, you'll need the Double Bypass, which bypasses the security that they added to the OBD-II port. It basically installs another OBD-II port in the trunk that defeats the security. Z-Automotive did a really nice job making it super easy to install too - plug and play.
Double Bypass – Z Automotive

Just mentioning this stuff since I just went through it. Haven't really even explored all of the Tazer options yet.

The ability to roll your windows up and down from the keyfob is pretty cool though.
1 - 6 of 6 Posts
Join the discussion
Continue with Facebook
Continue with Google
or sign up with email
About this Discussion
5 Replies
4 Participants
Last post:
jtrosky 9 mo ago
Dodge Challenger Forum
Challenger Talk, the online forum for discussions, reviews of Dodge Challenger, and all things SRT, Hellcat, and Demon.
Full Forum Listing
Explore Our Forums
General Challenger Discussion Exterior Discussion / Modifications Performance Modifications Dodge Challenger R/T Specific Wheels, Tires, Brakes, and Suspension
Recommended Communities