Wanting to replace dynomax minis in my scatpack

Found this video online with the Black Widows Race

or this one, whiich i guess will be the same thing as having a Challenger scatpack, but this one has resonators

Wonder if there is more people here with the same mufflers and scatpacks than can post some other clips with the BW 250's or more Race Venom without the resonators,
Same for those who may have Ultra flo's with no resonator

Joined Oct 7, 2017
·
178 Posts
Got the mufflers installed, and so far i like the end results.
They're not louder than the Dynomax minis, but i like the tone they produce a lot better, there is some drone i can say at around 2000rpm compared to the dynomax minis in Sport mode, no drone that i can hear in normal mode, but i had both windows opened today after pulling out of the shop, and there was just too much traffic to allow me to listen for the drone in a better way, i'm almost possitive this mufflers do drone a tad more than the minis (i have RES deleted) for sure.

Sound wise inside the cabin, its a mix of flowmaster 40's chambered down low with Magnaflow straight through mufflers like at WOT, i know it doesn't make much sense, but the change in note and pitch is more than welcome, it's still loud, just not as loud as the dynomax minis, at least sitting in the driver seat, tone is deep, kind of mellow down low, but throaty, she still screams up top nicely and aggressively, with zero trumpets at any point in the RPM, and i know some of you may know exactly what i'm talking about if this is not your 1st v8 performance vehicle with exhaust modifications, straight pipes accentuated this gargabe trumpet like sound at WOT, like a Harley bike with those flat/pinched exhaust tips that makes them sound like pure garbage, and the Dynomax minis didn't cure that, i still had trumpets like tone between 2000-4000rpm under med to heavy throttle just not as bad as they were with straight pipes, and then past 4000rpm at WOT, with or without resonators.

I'll see if i can have a sound clip tomorrow, ill more likely load my active exahust normal mode factory settings tonight, as i was trying to hide the loudness of the minis via tuning for normal mode. i don't think i have to do that anymore with this mufflers, plenty of space to allocate the Black Widow 250's if i wanted, but i wanted to error out on the loud side, and because the location of the mids, any muffler we put in there wouldn't be as loud as having them located right besides the exhaust tips, glad i did the smaller case, but if needed, the 14x9x4 case should fit without any problems, the Venoms are 9x9x4

Picture from underneath showing the mufflers. 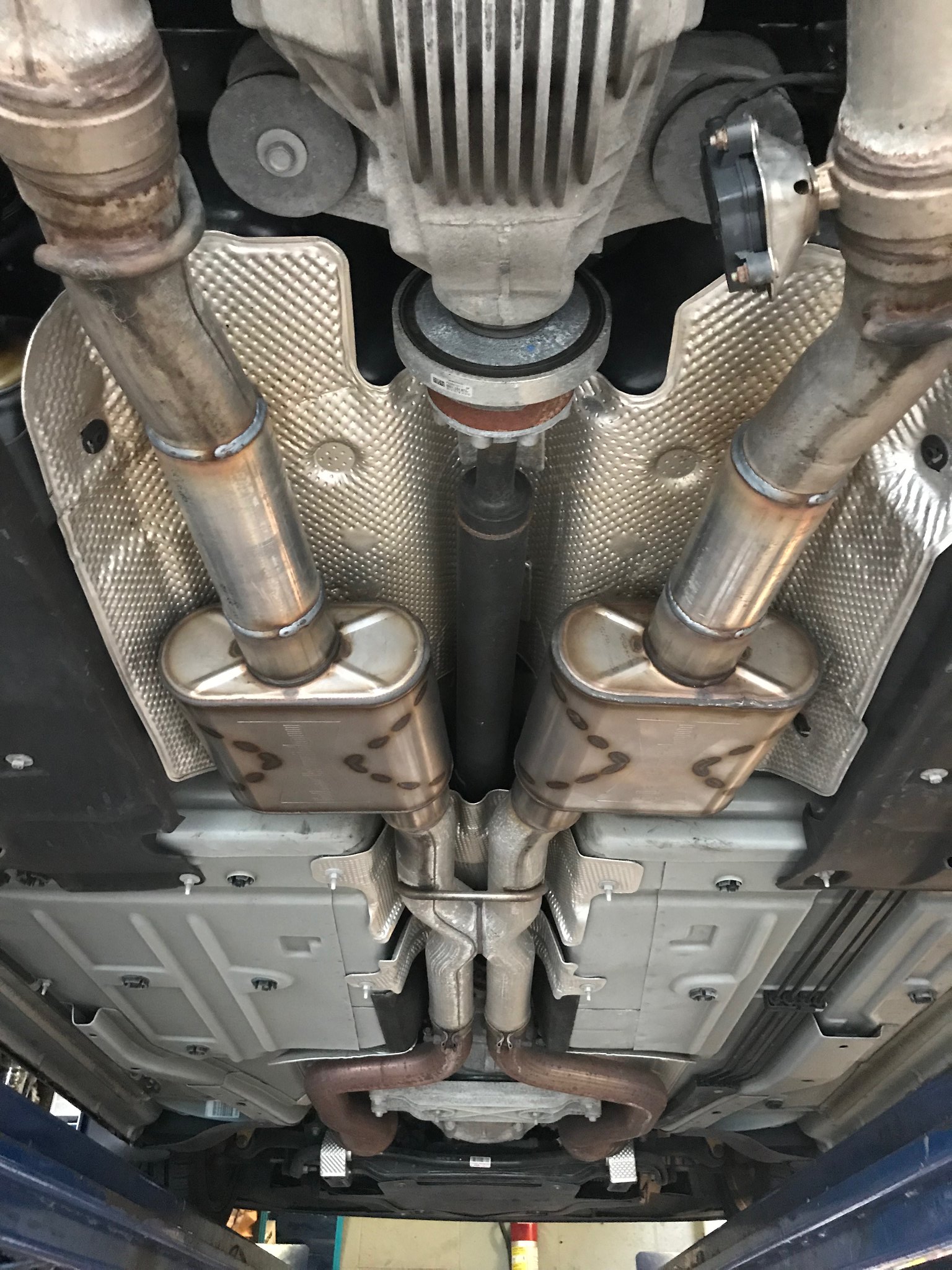 I've also ordered a new set of exhaust tips from Ebay, as i'm not exactly feeling the 4" ones i have at the moment, they're not staggered, so the outer edge tips are sticking out more than the inner ones because the bumper is curved, and the 4" openings are just too big, the new ones are 3.5" dual rounded, but slanted and staggered.

Have also adjusted my Active exhaust valves while in normal mode to have them operating almost like stock.
The drone is definetely louder with this setup than with the Dynomax minis inSport mode, offending RPM is about 2000-2700rpm more or less, so i simply adjusted the EAS tables for normal mode at that RPM following stock like valve %, and that's it, drone is pretty much nothing now in Normal, again, what i have for drone in Sport desn't bother me one bit, but since i can adjust the damn EAS valves, why not try to make it less obvious in normal mode, Sport the valves are open 100% anyways, and i think about the noise as just part of the character in the setup.
► Show Full Signature
2015 Challenger R/T Scat Pack, M6
Barton Shifter, CDV!, Petty's Front Strut Bar, Black Widow Race Venom/Res Delete, UPR CC, K&N Drop-in, FR70 Staggered 20" wheels, Toyo Proxes ST3 275/40 Front - 315/35 Rear
HPTuners v4.0 and my own HPT street tune...

MiHiHemi said:
Sound good! I'm guessing they'll get a little louder after a few miles too.
Click to expand...